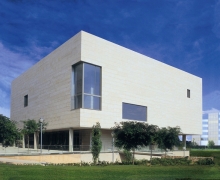 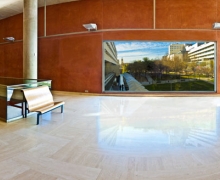 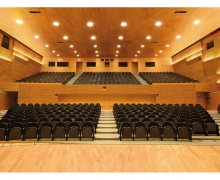 AXA Convention Centre is part of the L’Illa Diagonal, a large real estate complex located in the main artery of Barcelona. It integrates a shopping mall, two hotels, offices, parking, two schools, a sports center and a public park. Urban Communications are excellent, and access from the airport and the Rondas is very quick. The cutting edge design and the quality of the work are reflected in every detail of the building, both exterior and interior, making the complex L'Illa an emblematic heritage of the city.

You can find more information about the venue at: https://www.axa.es/acerca-axa/auditorio-y-centro-de-convenciones

THINGS TO SEE AND DO IN BARCELONA

Barcelona is recognized worldwide for its cultural, commercial, and touristic significance. There are many transportation and leisure options available within its metropolitan area. The city is organized into 10 districts, stretching from the slopes of Tibidabo to the Mediterranean Sea.

Walks Barcelona. The Rambla is its most famous street, and runs between the heart of the city and the old port. Lining it are restaurants, shops, and the city’s most emblematic structures.

The Sagrada Familia has become the symbol of Barcelona. It is the most well known and characteristic monument of the city, a yet unfinished temple considered the epitome of modernist architecture by Antoni Gaudí.

Parque Güell is the most important park in Barcelona. This is a large public garden featuring unique architectural elements designed by the singular architect Gaudí. It was declared a World Heritage Site by UNESCO.

Casa Batlló, right in the heart of the city, is one of the most visited and most valued tourist attractions. Built between 1904 and 1906, it is a key part of Barcelona’s modernistic architecture, and much more than a building, has become a legend of art.

Casa Milá, due to its rustic stone appearance, is a surprising modernistic building built between 1906 and 1912. This unique structure, located on the central

Paseo de Gracia, reflects the artistic grandeur of Gaudí during a time when he was working on various projects within the Ciudad Condal. Its stepped roof is its most distinctive part, an unusual space of impressive artistic and symbolic force. The ventilation towers and chimneys in this space appear as striking sculptures of petrified warriors. On the roof, admiring Barcelona’s city center from these heights is possible.

Museums. Barcelona is home to the Museo Nacional de Arte de Cataluña, one of the most important museums in Spain, located on the imposing Palacio de Montjuic. The Museo Picasso displays more than 3,500 works of art by the Malaga artist, constituting the best point of reference for understanding the artist’s formative years. The Museo Europeo de Arte Moderno, in the central El Born neighborhood, strives to promote and spread figurative art from the 20th and 21st centuries by publicizing works from contemporary figurative artists.

Shopping. Barcelona is one of the world's great fashion capitals, a cosmopolitan city where shopping enthusiasts will enjoy. Along the Paseo de Gracia there are multiple shops of luxury brands that make you sometimes compare it with walking along the Fifth Avenue in New York. Moreover, in Barcelona you can purchase quality products with designation of origin, as some spirits, meats, honey, and sweets. There are specialty stores for each of the products, and they are a very good choice for a souvenir of the flavors of the city.

Beaches. Throughout the entire Barcelona coastline a promenade that runs all the beaches, from Llevant to the north, and to San Sebastià in the south. All the beaches of Barcelona are well connected. The most popular are La Barceloneta, Sant Miquel and Sant Sebastià. In the south of the city, we would like to highlight the beaches of Sitges, Vilanova and Calafell. In the north of Barcelona, we recommend Blanes, the start of the famous Costa Brava.